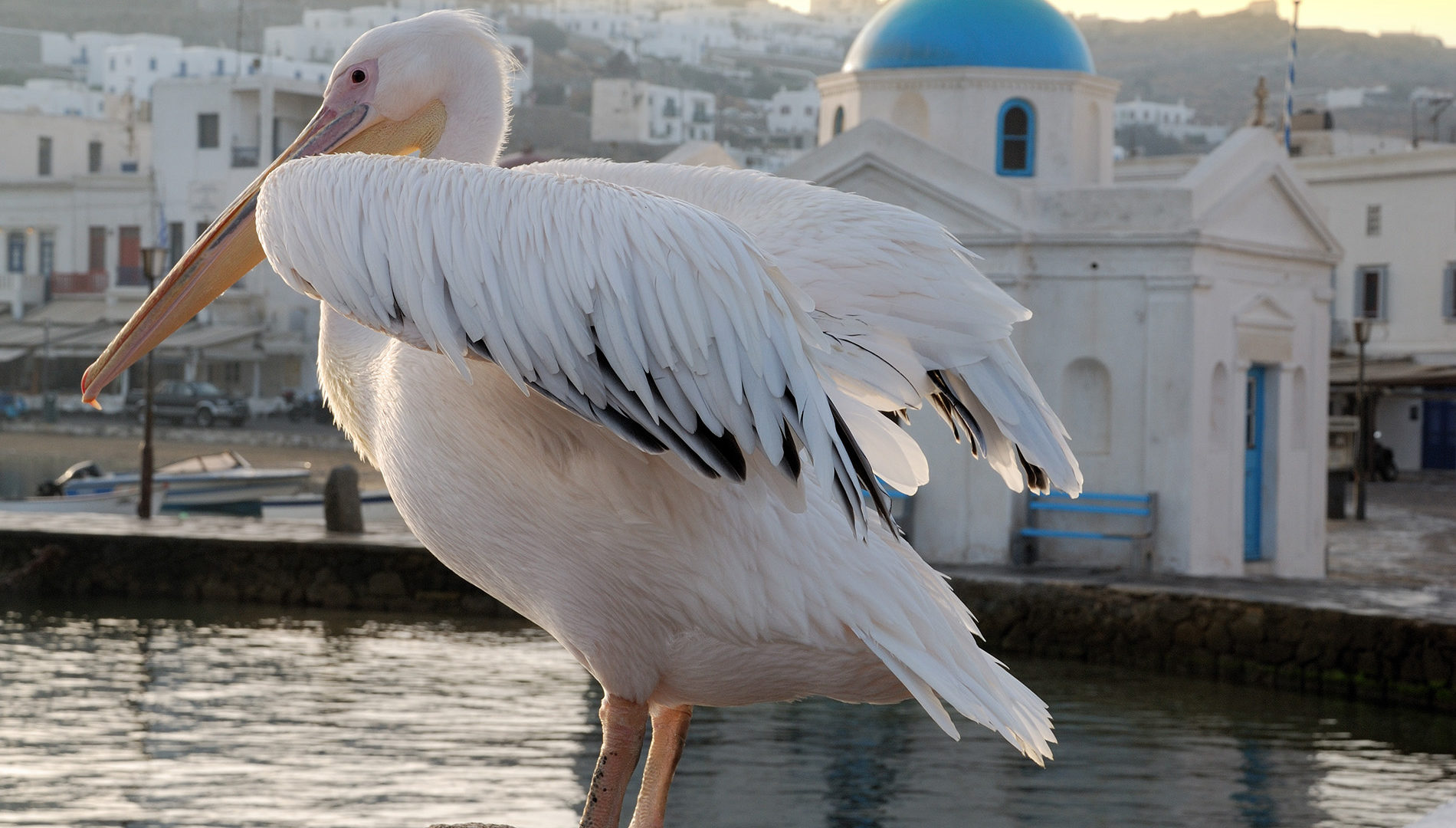 Things To Do and See in Mykonos

Mykonos, the cosmopolitan island located in the Aegean Sea is the most typical island of the Cyclades. According to Greek mythology it was created by the dead bodies of the Giants. This charming island attracts countless Greek and international celebrities who want to participate in its vivid nightlife, and enjoy the wonderful beaches and the breathtaking landscapes. The following is a list of some of the best things to see and do in Mykonos.

Peter the pelican was an emblematic figure of Mykonos and a symbol of the island during the 30 years of his life. A local fisherman found him wounded in 1958, and  since , breastfed  the locals gave him the name Petros, from ‘petra‘, which means rock in Greek – petra being the dominant architectural element of Mykonos and the Cyclades‘ Islands in general. Every summer, thousands of tourists rushed to make a picture with the mascot of the island.

The windmills of Mykonos constitute one of the most typical highlights of the Aegean Sea, famous all over the world. The impressive white windmills are located between the settlement of Little Venice and the neighborhood of Niochori. During the 17th and the 18th centuries the island had more than twenty windmills, which contributed to the wheat production, a fundamental element of the island’s economic development. Nowadays seven of them are maintained in decent condition.

Lena’s House is located in Chora, near the area of Tria Pigadia. It is an authentic sample of a Mykonian middle class family house of the 19th century. It hosts a collection of European and local furniture of the 19th century, as well as a wide range of useful or decorative objects, from mirrors to gravures and embroideries. From April until October it is open to visitors on daily basis except for Sundays, from 6.30 pm – 9.30 pm.

The Folklore Museum of Mykonos

The island’s Folklore Museum is located in Kastro, just some minutes away from the famous Paraportiani, in a two-floor traditional building. It hosts interesting collections of classic furniture, hand-made ceramics, Byzantine pictures, as well as important manuscripts and photographs. You have to visit this museum in order to get in touch with the deeper cultural identity of the island, which is so much more than the vivid beach bars.

The Monastery of Paleokastro is a women’s monastery dating from the 18th century, which was named after the homonymous nearby hill. It is a typical sample of the Cycladic monastery architecture, located north of the settlement of Ano Mera.

Famous for its rich collection of vases, some of which date back to the 17th century, the Archeological Museum of Mykonos is located in the heart of the island, close to the port. Except for the vases, it also hosts a unique collection of sculptures, ceramics and jewels. It is open to visitors every day except for Mondays, from 8.30 am until 3 pm.

Located in Tria Pigadia, next to Lena’s House, the Aegean Maritime Museum is a non-profit organization founded in 1983 with the goal to preserve and promote the Greek maritime history and tradition. In this direction, it exhibits replicas of rowing and sailing ships from the prehistoric times until today. It also hosts a rich collection of maps, ancient coins and sculptures, all under the thematic umbrella of maritime life. It is open to interested visitors daily from April until October, from 10.30 am until 1 pm and from 6.30 pm until 9 pm.

A two-floor building that dominates in the Chora of Mykonos. It was initially constructed to become the residency of a Russian earl during the Russo-Turkish war (1770-1774) and was afterwards used as the island’s Town Hall maintaining its initial classic architectural form. Next to the Town Hall was constructed an equally important and historical building, the first school of Mykonos.

The island of Mykonos hosts more than 70 Christian Greek Orthodox churches, following the tradition of the Greek islands. A large amount of them was constructed after the Byzantine period by rich families of the island in order to thank god or honor one of their relatives. You don’t need to be religious to visit some of those beautiful churches with the typical appearance. Some of the most famous Mykonian churches, known for their architecture, are Zoodochos Pigi, Agia Kyriaki, Saint Nicolas, Paraportiani and Agia Eleni.

You can find out more about which cookies we are using or switch them off in settings.

This website uses cookies so that we can provide you with the best user experience possible. Cookie information is stored in your browser and performs functions such as recognising you when you return to our website and helping our team to understand which sections of the website you find most interesting and useful.

Strictly Necessary Cookie should be enabled at all times so that we can save your preferences for cookie settings.

If you disable this cookie, we will not be able to save your preferences. This means that every time you visit this website you will need to enable or disable cookies again.

This website uses Google Analytics to collect anonymous information such as the number of visitors to the site, and the most popular pages.

Please enable Strictly Necessary Cookies first so that we can save your preferences!